Trust Matters……But Should Be Provable 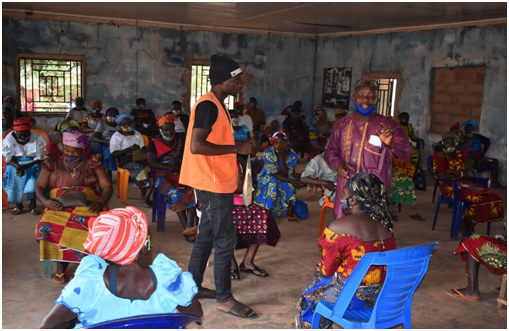 I was part of a joint team of Christian Aid and Community Links and Human Empowerment Initiatives (CLHEI) staff who were on field activities across some communities in three local governments of Benue state. The team was on the field to monitor the implementation of the COVID 19 secondary impact response, an intervention back funded by STARTFUND Network.

The activities include the distribution of Non Food Items (NFI)and Cash distribution targeting vulnerable people such as the very old, those with disabilities and widows.

Nowin each of the communities we visited, I noticed that the beneficiaries as they sign and collect their cash envelopes, they walk away without sparing a moment to count and confirm if the cash in the envelope was accurate as promised.

This was despite the fact that there was a clear instruction earlierthat they (beneficiaries) count the money to ensure it was complete.

So I walk over to one of them, an old woman, and asked her why she did not count the cash in her envelope? She looked at me, smiled and responded, “I trust CLHEIto keep to do the right thing”.

And I replied,“Really”? I then asked the old woman,“what if some notes were missing in the envelope?” At this point, some other beneficiarieswho were close by became interested in our conversation and moved closer to make sense of what I was trying to explain.

I then asked them to assume they took the money home without confirming how much was inside the envelope. Then later at home they want to spend the money and discovered that some notes where missing and the total cash is not compete as promised.

“So will they still trust CLHEI to have done the right thing?” I asked.

At this point, some of the beneficiarieswho were standing around me with the envelopes in their hands stared at me dumbfounded. And with a smile one of the women said, “I will count mine now”.

And immediately all of them started counting their cash. And when the finish counting,they looked up at me with smiles on their faces, satisfied that thenumber of cash notes in the envelopes were accurate as promised. They thanked me and walked away.

As they walked away, I asked myself, “that I trust someone or something is it enough?” Maybe not, it needs to be proven. And watching the beneficiaries count their cash, only hit home the fact that trust should and must be provable.

Trust is a vital ingredient of human interactions in a society which enable things to be done with relative ease.And as such, trust is built in very small moments and it also needs to be proven,that each party in a dealkeep to his/her words.

And when you keep to your words- you show respect to the other party which in turn reinforces the trust between the two parties.

For organizations such as Community Links and Human Empowerment Initiatives that works in rural communities where the poor and vulnerable people in such communities have over time been exploited, deceived, and cheated, CLHEI cannot afford to betray the trust the people have in the organization.

As one woman puts it, “We trust this organization’s (that is CLHEI) approach compare to others”.

So it’s little wonder that when the people come, in an orderly way to sign, and collect money meant for them with relative easy, they get carried away and see no need to count the money. According to them, “they trust CLHEI”.

While the community people can confidently expressed their trust for CLHEI as we witnessin the different communities, they do not seem totrust their community leadership.

In one of the communities, some of the beneficiaries who were suspicious of the community leadership gave us a tip on some perceived corrupt practices by some of their local leadership whom they suspect were using their cronies to impersonate the real vulnerable people and collect the cash for themselves.

We acted on the tips and investigated their concerns. And we found out that the communications between the community leadership and their people were not entirely open as it should be.  And in most of the communities, the people were not wholly engaged and involved all through the process as they should.

And so the community leadership found themselves in a position where their people entirely don’t trust them.

How can community leadership be supported to earn the trust of their subjects?

Community leadership can either sabotage your work in the community or they can create an enabling environment for your intervention to be successful.

So, based on what we learnt from the communities, for trustto be earned it must evolve naturally in the following ways:

Now, if the community leadership can consistently practice this with their people in different situations, they willcertainly earn the trust of their subject.

And on its part, CLHEItoo can also help community leadership earn the trust of their people by recognizing and understandingthe social fabric of such community especially at the entry point and prepare the ground for open communication that will get the people involve right from the onset such that it can close those little spaces that could bethe breeding ground for suspicions.

So, when you are working in a rural community: Trust matters -to get things done easily- but should be provable!

SourceAkile Julius Gojo An experienced media and communications professional who is passionate about communication for development. He supports CLHEI information and communication unit as a volunteer. Can be reached @ akijay3x@gmail.com (+234) 0806-389-0052
Share
Facebook
Twitter
Pinterest
WhatsApp