GET OUT THE VOTE PROJECT (GOTV) 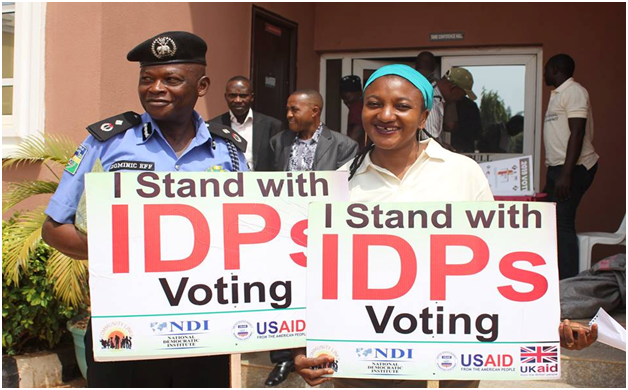 Electoral participation by Internally Displaced Persons [IDPs] is a particularly challenging political undertaking that is increasingly relevant in Nigeria given there were an estimated 2 million IDPs by the end of 2017 (Source: https://www.unhcr.org/nigeria-emergency.html). Apart from the insurgency which was orchestrated by the Islamist militant group – Boko Haram, flooding, herdsmen menace, inter-communal clashes ignited by ethnic and religious tensions, especially in the Middle Belt region, have also caused a lot of people to be displaced from their places of abode. Benue State has an estimated 123,530 IDPs and as the elections drew closer, there are concerns that a good number of registered voters would be disenfranchised, owing to the fact that they have been displaced from their homes/ wards where they registered to vote and their participation will promote engagement, reintegration, and prevent marginalization. The political voice of IDPs is needed for dialogue and for making governments more accountable, which can be particularly important in meeting the needs of the vulnerable IDPs.

In response to concerns about the plight of IDPs and ensure that IDPs in Benue State participate in the just concluded 2019 general elections, the IDP Voter Education /Get-Out-The-Vote [GOTV] campaign was designed and Community Links and Human Empowerment Initiative (CLHEI) with support from the National Democratic Institute (NDI) and funding from United States Agency for International Development (USAID) and United Kingdom Aid (UKaid) was engaged to implement a 3.5 months project with activities to mobilize IDPs in Benue State to participate in the 2019 general elections by providing voter education on the new IDP voting framework and Get-Out-The-Vote campaign.

The objectives of the project were as follows:

CLHEI’s used strategies such as Advocacy to relevant Stakeholders in the State and Local Government Areas, Stakeholders Consultative Meeting with key actors, Sensitization meetings with IDP mobilizers across the three Senatorial Zones, Information Education and Communication [IEC] Materials and Theatre for Development [TFD] as a tool to implement activities on the Voters Education and Get-Out-the-Vote [GOTV] Campaign in nine [9] camps and two [2] communities to create awareness and mobilize support for full participation of IDPs in the 2019 general election.

Over one hundred thousand IDPs in the Camps were sensitized on Voter Education and GOTV Campaign through the use of TFD, IEC materials and jingles on three radio stations. 27,546 IDPs further participated in the 2019 general election.

NDI supported CLHEI in mapping out stakeholders, development of agenda, advocacy asks and talking points in the cause of the campaign.

Finally, a press release on IDPs participation in the 2019 general elections was issued by CLHEI shortly after the elections.

Among the media present are;