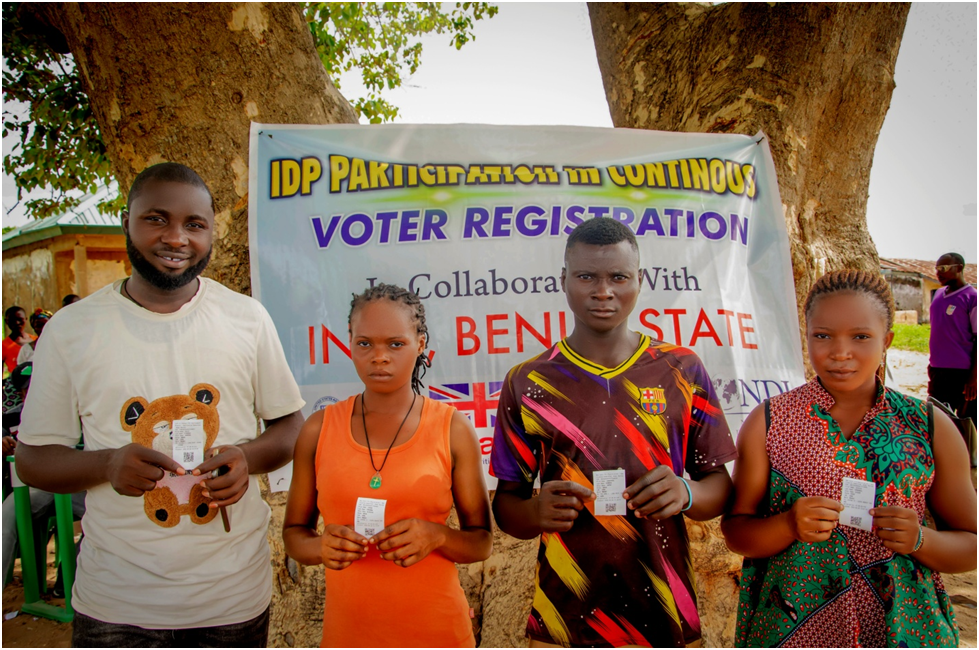 Benue State has a cumulative total number of 1,587,000 IDPs (BENSEMA 2021) living across seven official camps, eleven (11) unofficial camps and many host communities across the three (3) senatorial zones in the state. The participation of IDPs in electoral processes will promote engagement, reintegration, and prevent marginalization. The political voice of IDPs, women, youth and other younger voters who have recently reached the voting age is needed for dialogue and to make the government accountable, which can be particularly important in meeting the needs of the vulnerable persons.

Baseline assessment revealed that a sample size of 1236 respondents were assessed across 3 IDP Camps (Ortese, Uikpiam, Daudu 3) and 5 host communities [Makurdi (Nepa Quarters, Federal Housing, 72 Barracks), Kwande (Jato-aka) and Agatu (Obagaji)] of Benue State. Out of this population, 939 IDPs did not vote in the 2019 elections with 67.9% citing that they do not have PVCs. 50% of the respondents had no prior knowledge of the CVR exercise before the introduction of the program, while 544 IDPs had little knowledge of the electoral process in Nigeria. Analysis further revealed that 96% of respondents agreed that they will vote in 2023, while 4% respondents said no stating their reason to be a lack of interest in the electoral process and unavailability of PVCs.

In ensuring that internally displaced persons (IDPs) in Benue State participate in the upcoming 2023 general elections, Community Links and Human Empowerment Initiative (CLHEI) with support from National Democratic Institute (NDI) is using strategies such as Advocacy to key stakeholders, sensitization and mobilization for the CVR Pre-registration exercise to increase participation of IDPs in the 2023 general elections in Benue State.

Over the last two weeks, IDP Champions supported by CLHEI Staff were able to carry-out pre-registration across the 3IDP Camps/5 Host communities reaching out to a total of 1064 direct beneficiaries before the shutting down of the CVR Portal by INEC on May 30th 2022. Consequently, CLHEI is nudging INEC toward complete registration of the IDPs pre-registered before the June 30th 2022 deadline.